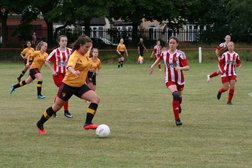 Fantastic 5-2 victory for the girls

Tough pre-season opener for the Girls.

Alvechurch Ladies U16s returned to competitive football today with a very tough encounter against quality older opposition. Stourbridge U18s play in the CWGFL Premier U18 division, and from the outset we could see what a class act they were. Social distancing & COVID regulations were excellent & a credit to Stourbridge who had everyone’s safety at the forefront.

The ladies travelled to Stourbridge, on the back of an excellent season last year & had it not been for the COVID interruption not many would argue this team would have gone on to League & Cup double, their dominance was rewarded with the selection for 2 girls to the Wolves RTC. This has given the opportunity for us to welcome Grace Barsby & Tas Kunor to the fold, and both certainly didn’t disappoint on their debuts.
Alvechurch lined up 3 1 4 2. The game started at a good tempo with both sides playing some attractive football. Alvechurch sitting back & allowing the opposition possession & then setting traps to nick the ball back when they ventured into the Alvechurch half. Two quick breaks from Stourbridge were thwarted by the ever dependable & tenacious Mia & Darcy. Stourbridge’s excellent no 11, was given no time to dictate play & on numerous occasions was chased down by the impressive Olivia & Georgia, Olivia was full of running & a constant menace with the ball at her feet.

The first half was fairly even however it was Stourbridge who made the breakthrough coolly finishing after evading the off side trap. Albeit a little against the run of play, but some sloppy possession in the middle of the pitch gave Stourbridge the opening. 1-0 to Stourbridge, and then so nearly 2-0, with their CF clean through on goal. Brave Harley put her body on the line to make a fine save, sadly that would be the end of the day for Harley who limped off with a nasty gash to her knee. Leah came on to replace her.
It was soon 1-1, what a debut for Grace Barsby! A great break from Lily-Rose & some good passing in the middle from Georgia, Jess & Olivia. The ball eventually found Grace just outside the box firing an unstoppable left footer into the top corner, word has it she is equally as good with her right foot, only time will tell!

Tas Kunor also making her debut impressed massively, with her coolness on the ball, quick feet & wizardry runs down the left flank, she was causing Stourbridge problems.

Grace was soon to become provider, after latching onto an excellent through ball from Ellie. Grace calmly gave the ball to Olivia who wasn’t going to miss and coolly slotted past the keeper with her left foot. 2-1 Alvechurch.

Stourbridge continued to play excellent football & the excellent no 16 at full back put in a fantastic cross, sadly no end result.
The front 2 of Alana & Grace continued to run tirelessly & it was debut girl Grace who so nearly doubled her tally after robbing the Stourbridge centre back & then curled a delightful ‘right foot’ effort which glanced the post.

The outstanding Georgia won back possession again & again against her elders! She put in Mia & her long range effort was deflected out for a corner.

Stourbridge were on the attack again & the ice cold talented no 11, unleashed a wonderful shot from distance giving the Alvechurch keeper no chance 2-2. Credit to both teams as the first half came to an end.

Scott rang the changes at half time and brought Millie into goal, Lily Rose dropping into left back. Stourbridge came out in the 2nd half and were beginning to show what a quality team they are. Narrowly going wide with a super effort. With Stourbridge now dominating proceedings the tiring Jess & Lily were substituted for Darcy & Georgia.

Stourbridge talented no 16 produced a wonderful effort from distance which was brilliantly tipped past the post by acrobatic Millie, wonderful save which seemed to kick Alvechurch back into life. Millie, who started at left back & is overcoming her injury battles looked assured between the sticks & her return to fitness, is like a new signing.

Alvechurch tactics were spot on, soaking up pressure & then quickly working the ball through the midfield & up to the strikers & Grace, who cleverly rounded the keeper only to be cruelly denied a 2nd goal after putting the ball into the empty net, strangely the referee decided to give a penalty for the early infringement by the GK. Olivia calmly stepped placing the ball low to the keeper’s right hand side to make it 3-2 Alvechurch.

Grace was through again shortly after latching onto an Ellie through ball. Only the keeper to beat, just putting the ball past the right post.
Stourbridge hit back straight away, the talented no 11 just putting over from a free kick. And were on the attack again only to be denied by Eliza making a super last ditch tackle.

Tas was really impressing on the right hand side & was linking up well with Alvechurch's ‘pocket rocket’ Alana. With Stourbridge’s defence tiring Alana has the speed to hurt teams, and this was proven as she latched onto a through ball. There was to be only one winning, Alana racing through and sliding the ball past the advancing keeper. 4-2.

Stourbridge never gave up & had dangerous players upfront & in midfield that can hurt any team. However the defence of Alvechurch were not in the mood to give anything away, marshalled by the mighty Mia it wasn’t going to be easy for Stourbridge & the rest of the defence in Darcy & Lily Rose dealt with anything thrown at them.

Nearly a champagne moment for midfielder Jess, who rarely ventures near the opposition goal, picked up a loose ball and her long range effort went agonisingly wide of the top corner.

In the final moments, Alana broke through with pace, her cross unfortunately for Stourbridge deflected off the defender & into the net to make the final score 5-2.

An excellent result for Alvechurch, they looked sharp, fit & will get better. The girls are certainly buying in to the attractive brand of football coaches Scott & Carl are demanding from them, which can only bode well for the season ahead. Much credit must go to Stourbridge, who play excellent football.

Player of the match was awarded to Millie - well done Millie!

Coach Scott Wilkinson commented after the match “Good start to pre-season after such a long layoff. Still lots of work to do, and for us to improve on. Pleasing how the new girls seemed to fit in line as if they have always been part of the team”

Assistant coach Carl, who himself gave an energetic display on the side line commented “ really pleasing to see some of the work in training has been adapted into a match scenario, hard work for the girls today but overall a pleasing display”