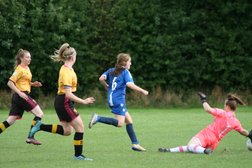 Good away win for U16 Ladies at Sutton Coldfield Town

Alvechurch Ladies U16 continued there preparations for next weeks Central Warwickshire Girls U16 Premier Division match against AFC Telford, with a tough away trip to Sutton Coldfield Town U17s from the age group above.

The girls were keen to build on last weeks victory against Kidderminster Harriers. However from the kick off it was the home team that settled quickly & dominated possession. It wasn't long before the home team were ahead & deservedly so, a clever pass released the CF who managed to just put past the Alvechurch keeper Harley who tried desperately to stop the ball trickling over the line.

1-0 down and being dominated, manager Wilkinson switched things up & changed formation, this immediately changed things. Full Backs Millie & Mia were able to push forward & It was Mia who levelled things up. Some great work from Grace & Ellie in the build up setup Mia with unstoppable shot past the Sutton Keeper. 1-1.

The game now started to flow end to end. Sutton Coldfield possessed excellent midfielders & wide players who continued to probe the Alvechurch back 4, but Eliza, Mia, Millie, Darcy & of course Harley in goal stood firm. With Sutton pushing forward it was Alvechurch who looked the most dangerous & chances were spurned when both speedy Grace & Alana broke free only to see their shots blazed over or well saved.

It wasn't long before Alvechurch took the lead, Mia released Ellie with a lovely through ball. Ellie made no mistake, slotting past the Sutton keeper. 2-1 at HT

The 2nd half was a much tighter affair, Suttons back 4 sitting deep to counter the dangerous pace Grace & Alana upfront with Georgia putting in a shift behind the front 2. Clever work from central midfielders Jess & Liv B found the Ellie who set Alana free, whose excellent effort came back off the cross bar. Grace was soon on the score sheet & after being put in by Ellie with a lovely through ball. Sutton continued to play & were unlucky not to be back in the game with Harley pulling off a magnificent save after the Sutton CF was clean through.

4-1 wasn't far away. Liv B storming down the right flank put Alana free & she unselfishly passed to Grace who made no mistake from close range.

An excellent break down the left by Lily-Rose & clever pull back found Grace again, who narrowly put wide & missing out on consecutive hat-trick. The match finished 4-1 to Alvechurch.

The girls are looking a force, playing attractive football & looking on course to challenge for the league again this season. After the match manager Scott Wilkinson commented " A very good performance from us today. We are now staring to play exciting football which the girls are getting plaudits for"

Player of the match was awarded to Mia. She played in a new position today & worked extremely hard & capped it off with a goal.