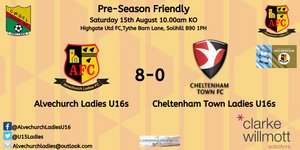 Excellent win for the Ladies U16s against Cheltenham U16s

8-0 home win as preparations continue for the league re-start.

Alvechurch continued pre-season today with a comprehensive victory against a hard working & well organised Cheltenham side. Alvechurch build up play through the first half was excellent at times, but decision making & the final ball was often lacking. The Cheltenham keeper was outstanding and made a string of fantastic saves to keep the visitors in the game. Dead lock was broken on 15 minutes, when Grace made no mistake after being put clean through. It was 2-0 on the stroke of half time, Lily-Rose smashing the ball into the roof of the net after some good work down the right hand side from Leah.

The 2nd half saw Alvechurch step up a gear & bar the odd Cheltenham counter attack, Alvechurch controlled possession and picked Cheltenham apart, it was 3-0 soon after, fine work from Lily Rose down the left & set up Georgia to side foot home. The girls calmness in possesion & superior fitness levels were giving them the advantage & when Mia put a fine through ball set set Alana free, she calmly slotted past the keeper to make it 4-0.

The fifth goal was to be long away & good work from captain Olivia freed up Grace for her brace! 5-0. Alvechurch's 2nd half dominance was beginning to tell & the home team looked dangerous with every attack. Some excellent dribbling from Tas down the left flank & then a cut back to Georgia gave her plenty of time to curl a wonderful shot into the far corner past the excellent Cheltenham keeper. Alana was set free again, her pace against tiring defenders is a real threat & she made no mistake to make it 7-0. With the match all but over, Alvechurch left the best till last, new signing Tas latched onto a pass and lifted the ball over the last defender & half volleyed into the top corner & truely wonderful goal from Tas who along with Grace are already is looking fantastic additions to the squad.

The game ended 8-0. After the match head coach Scott Wilkinson commented "I thought we started off slowly, we were comfortable in possession, however, at times our decision making was not ideal, second half we dominated the match, played some excellent football and scored some wonderful goals. Our fitness levels were very good"

Player of the match was awarded to Georgia, it was a tough choice this week. She played 2 different roles really well and adapted brilliantly.

Next week the girls travel to Hednesford Town U18s