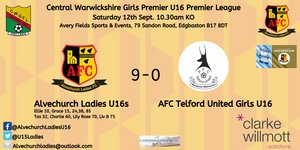 Alvechurch U16s started the new league campaign using the impressive facilities at Avery Fields who boast arguably the best grass playing surfaces in the region that would not look out of place at any professional league ground. The scene had been set for some excellent attractive football & the home team were not to disappoint.

Travelling AFC Telford were to be formidable opponents winning their league last year with 12 straight victories & no losses & from the outset Telford pressed high, were physical & very direct with their passes. The Alvechurch back line of Eliza, Mia, Lily-Rose & Jessie had to soak up early pressure from Telfords' pacy forward line.

Alvechurch were soon on their fast passing game & an excellent through ball from Mia sent Ellie free & she made no mistake on 10 mins to make it 1-0 to the home side.

Telford responded well & nearly levelled shortly after going behind with a superb long range effort which narrowly went over Harley's goal. It was Ellie who was to turn creator for Alvechurch second goal, slipping a lovely through ball to Grace who made no mistake putting past the advancing Telford keeper.

Alvechurch were now on the ascendancy. Great counter attacking down both flanks from Alana & Lily. The third goal wasn't to be far away & this was the case. Debutant Ruby made an instant impact, a mazy run & clever pass pass found Grace who cooly put past the keeper. 3-0 on 24mins. And Tas could have made it 4-0 shortly after. Captain Liv made arguably the pass of the day to release Tas but her effort was well saved by the Telford keeper.

Ruby was enjoying her new surroundings & skilfully found Ellie who in turn put the ball on a plate for Tas to finish well.

Credit to Telford, they kept battling but there was to be no way past the Alvechurch back line with keeper Harley having little to do. Harley instigated Alvechurch's 5th goal just before half time, quickly throwing the ball to Mia who then moved the ball quickly to the impressive Ruby, who comprehensively beat the Telford left back then found Tas, whose clever flick left the goal gaping for Grace to fire home a first half hat trick. 5-0 HT.

Coaches Scott & Carl switched things up in the 2nd with a slight change of system & it was the away team that started the brighter. An excellent cross from Telford re-bounded off Alvechurch captains arm & a penalty was awarded to the away team. Telford's well struck penalty was well saved by Harley low to her right. This kick started Alvechurch back into life. Alvechurch midfield were finding there dangerous forwards with ease, both Ruby & Alana were enjoying themselves & unlucky not to score.

And it was Ruby & Alana again who combined to find Charlie who fired an unstoppable shot into the top corner to make it 6-0. on 60mins. Georgia & Jess in central midfield worked tirelessly to break up Telford attacks & sadly for Jess she was forced to leave the field after being on the wrong end of a heavy challenge from the Telford central midfielder.

Lily-Rose produced a spectacular long range effort to leave the Telford stranded only to see the ball in the top corner of the net. 7-0 on 70 mins.
The extra work on shooting the girls have certainly paid dividends & captain Liv was soon in on the act. A weaving run on the right hand side of the area eventually free up space for her to unleash with her left foot into the far top corner. 8-0 on 75 mins.

Most teams would have given up but respect to Telford, they never stopped pressing & defenders Eliza, Millie & Mia still had their hands full dealing with pressure from Telford. However Alvechurch can be at their most dangerous when soaking up pressure. They possess real speed on the wing & fast incisive ball playing midfielders who can cut most teams open & this was the case when Grace sped away in the final minutes to score her 4th of the game & 12th of the season, making the final score 9-0 to Alvechurch.

Todays 'Player of the Match' was deservedly awarded to Georgia. Georgia put in a ferocious performance today. She was solid all game. She adapted really well to a few position changes and didn't give her opposition an inch of ground. One of the more physical players on the pitch, Georgia is relentless, with a 'terminator' like focus! Well done Georgia.

After the match. Head Coach Scott Wilkinson commented "After a slow start, the girls only really got going after the first goal went in. A few players are really adapting well to different positions. Our finishing was better this week and some of our attacking play was very good. We've some really exciting players who are new to the team & they have settled in better than I could have imagined. This team will only improve as the season goes on. Excited to see how this team progresses"

No league game next week, so the girls travel to Nottingham to take on Notts County U18s - another tough test for this group.