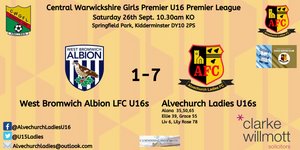 Alvechurch U16s travelled to WBA U16s, recent league from both sides made the visitors firm favourites on paper, however WBA were to provide excellent opponents.

Alvechurch went into the game on the back of the two excellent wins & possibly started the game with an air of complacency that this would continue against a WBA team that had lost their first two league games. WBA from the outset were lively, skillfull, well drilled, and were immediately on top & looking the better team. The back four of Lily Rose, Eliza, Tas & Millie had their hands full. The first 25 minutes was very much Alvechurch keeper versus WBA forward line. WBA were able to launch long ball after long ball towards their speedy & skillfull forwards who on numerous occasions bore down on goal with only Harley to beat. Fortunately for Alvechurch Harley made superb save after save. Alvechurch did try to counter, but unlike them were unable to get a get a grip on the game. Some sloppy play from Alvechurch gave WBA to take the lead from the penalty spot. 1-0. Credit to WBA it was a deserved lead.

The WBA goal sparked Alvechurch into life, some good work from Ruby freed up Alana & she curled a lovely left foot shot into the corner, very much against the run on play. And it was soon to be 2-1 to Alvechurch on the stroke of half term. Boyd by their equaliser Alvechurch pressed up field & the ball fell to Ellie who smashed in a long range effort. 2-1 at half time & a real kick in the teeth for WBA, who had been excellent in the first half & on another day could have been 3 or 4 nil up. Alvechurch had keeper Harley to thank for keeping her team in the game.

The two late goals seemed to knock the wind out WBAs sails & things got worse for the home team at Half time. Unfortunately one of their talented forwards had to leave the field through injury & with no subs to call upon the home side had to take the field with 10 players & this changed the entire complexion of the match. It was now Alvechurch who could dictate possession & push up the field and enjoy the majority of play & after an excellent run down the left from Grace & pin point cross, Alana was on hand to tap in for her second of the game. 3-1.

Good pressure from Alvechurch produced their 4th goal. Charlie chasing the ball down against the WBA keeper saw the ball break free for Grace to fire home 4-1. WBA were still a threat on the counter attack & another long ball set their speedy forward free, her fabulous shot was destined for the top top corner had it not been for a fine finger tip save onto the bar from player of the match Harley. To rub salt into the wound Alvechurch went straight down the other end to make it 5-1. An excellent individual run from skipper Liv, saw her left foot effort nestle into the bottom corner.

Alana was was on hand to complete her fine hat trick, and excellent through ball from Charlie set Alana free one on one & she made no mistake. 6-1. In the dying minutes a further goal by Lily-Rose made the score 7-1.

The match ended 7-1 to Alvechurch who continue their excellent start to the season. Much credit must go to WBA, they contributed massively to an entertaining game & will win more than there fair share of matches this season.

After the game, assistant Manager, Carl Murphy commented 'very tough conditions today for the girls, not at our best in the first half. Credit to the girls in the second half, stepped up their game and dominated and came out eventual deserved winners'.

Todays 'Player of the Match' was deservedly awarded to Alvechurch Keeper, Harley. Harley is the most fearless player on the pitch. With her team under immense pressure in the first half, Harley stepped up making a series of world class saves that kept Alvechurch in todays game. Arguably the best keeper in the league, Harley can always be relied upon no matter what the situation. Well done Harley!!