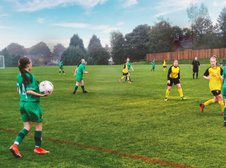 Both teams went into this match with 100% records & the home side expected an extremely tough encounter & Burton were not to disappoint.

With the wind & rain on their backs it was Alvechurch who dominated & controlled possession in the first half and Ellie was on hand to put the girls in front with a well worked goal. And Alvechurch thought they had doubled their lead immediately after the restart but the goal was ruled out for offside, further review of video footage shows this to be a harsh decision & had the goal stood the whole complexion of the game may have changed. However Burton rallied & soon level. A good run from the Burton winger saw her unleash a super effort from distance to give keep Harley no chance. It was now game on 1-1 at HT

Alvechurch who were now on the wrong end of the wind & rain facing Burtons long ball tactics which would become a real threat & Alvechurch would need to be careful on guard. Immediately from the re-start some excellent passing gave Alana the chance to fire home. 2-1. But it is said you are at your most vulnerable just after you have scored & this proved to be true. A speculative long ball into the Alvechurch box, combined with sloppy defending saw Burton poke home from close range. 2-2. And things were soon to get worse for Alvechurch when the referee awarded a penalty to Burton which they duly converted 2-3. This very much brought the game into life, both on & off the field, with both sets of supported urging their team on.

Alvechurch were now really up against it, 3-2, not only playing against the driving wind & rain but also having to break down an extremely well organised Burton back line that were happy to sit deep win possession & drill long balls back up the field. To the home teams credit they got back on level terms with a lovely goal from Grace 3-3. This game could now go either way! And tackles were flying in from both teams! And it was Burton who thought they had nicked it late on. Another long ball slipped under the excellent Harleys hands & left the Burton centre forward a simple tap in. Burtons players & parents now believed the game was in the bag! But never write off Alvechurch, they fight to the end and in the dying minutes skipper Olivia produced a fantastic effort to make the scores 4-4. Burton responded immediately & with the last kick of the game had an excellent effort which was destined for the bottom corner only for Harley to make up for previous error & save her team for the 2nd week running!, tipping the ball past the post.

The match finished 4-4, Burton will be a force this year & possibly went away disappointed not to have taken 3 points & on the flip side Alvechurch possibly felt they had snatched a draw from the jaws of defeat. Either way the game was an excellent advertisement for the U16 Premier league.

The tough games keep on coming the girls travel to Unbeaten Derby County on saturday.

After the match drenched Alvechurch manager commented: "Credit to Burton who came with a game plan to disrupt us which combined with the horrible conditions & poor decision making from us contributed to a difficult game for us. However i have to give credit to the girls for their endeavour. We will definitely learn from this and apply ourselves better in the future"

Todays 'Player of the Match' was deservedly awarded to Alvechurch defender Millie! As always Millie was solid all match, she looked to play forward all the time. She came out on top in all of her battles with the Burton strikers, and kept her cool following some nasty industrial tackles. Not only an extremely talented player, this young lady is fearless! Well done Millie!