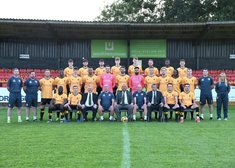 Church found themseles on the wrong end of a 1-2 scoreline after conceding a late penalty to unbeaten Needham Market.

The afternoon began with a minute’s applause for Fred Evans, former Alvechurch director and backroom worker. A sad loss of a good man.

Another wet afternoon at Lye Meadow, with the rain teeming down almost throughout the whole game, and a good old fashioned game of football ensued.

Lots of possession for Needham Market in the opening minutes, but first blood to Church on nine minutes from the first on-goal chance of the game. Brown-Hill swings the ball in to the far post area, Birch directs the ball back to the edge of the box, and Aaron Lloyd is on hand to steer the ball low into the corner with an accomplished first time shot.

The league high flyers were not behind for long, but Church will feel aggrieved as to d, the manner of the equaliser as a mis-directed cross from Mills, from wide left loops unintendedly high into the far corner of the goal. One-one with just a dozen minutes on the clock.

Mills strikes on target from distance for the visitors on 16 minutes, but Maher is well behind it, but there is little else of consequence in terms of clear chances for a while.

A great chance for Church on 35 minutes when Brown-Hill swings in a free kick and the ball is met by an unmarked Hull just eight yards out, but there is no clean contact and the ball plops onto the wet turf and is comfortably gathered by keeper Garnham.

And as the half time whistle beckoned, a let off for Church when Maher fumbled a ball lofted into the box, and Hunt lifted the ball towards an empty net, but thankfully Hull is on hand on the line to steer the ball to safety and preserve the equality at the break.

Needham begin the second period strongly, with a driven free kick on 48 minutes from Lawrence deflected wide of the far post by Willets’ head, and three minutes later a great saving block tackle from Sephton denies Fowkes when through on goal after the visitors had threaded the ball through the Church defence.

But Church built up some momentum and began their own period of dominance and pressure. On the hour a Walker cross is brilliantly met by Lloyd with a goal-bound header that Garnham has to tip wide with a full stretch flying save to prevent the ball going into the top corner. Church were in the ascendancy, and had certainly upped the ante in terms of the tackling being put in and the pressure being exerted on any possession the visitors were having.

On 63 minutes Maher pulls out a great save to turn a low effort from Needham from just outside the box around the post, and then at the other end McLintock sends a 25 yard effort just wide of the angle of the goal.

Needham then find their second wind as the game enters its final ten minutes. Church dig deep to defend a series of corners, but on 83 minutes it all unravels as Mills whips in a free kick from wide on the Church right. The conditions contribute somewhat to the ultimate winner for the visitors, when Church once again conceded a needless hand-ball in their own box, and a penalty is harshly awarded.

Substitute Ingram sends Maher the wrong way as he strokes the ball in to give Needham the lead with just seven minutes remaining.

A difficult defeat for Church who matched their unbeaten opponents throughout. The home side have worked really hard in this second half ,and have ultimately been undone with a moment of randomness. A draw would have been richly deserved, but despite the defeat there were some good performances, none more so than right back Jake Walker who looked comfortable and combative throughout. On loan from Aston Villa U23s, Walker looks a really useful addition to the squad.