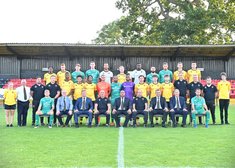 Church suffer their 2nd defeat in 4 days at neighbours Bromsgrove

Church started with one change on the bench, with Max Ngbeken replacing Brad Burton.
Before kick off there was a minutes applause in memory of ex Rovers manager and Baggies player, Bobby Hope who died recently.
Several of his former Rovers players were present, including our own Dougie Griffiths who was Bobby's assistant at Bromsgrove.

It was all Church to start with, with first big chance falling to Tyrell Hamilton who was through on the left, only for his shot to be saved by ex Church keeper Ollie Taylors legs for a corner.
Hamilton again got behind McGrath before his cross was cleared by Taylors legs.
Next it was Waldron getting behind on the right, only to see his cross cleared off the foot of Hamilton for a corner.
First opportunity for Bromsgrove came when Gregson's shot was saved low by Phillips.
Again it was Waldron on the right, past his defender before pulling his shot wide of the post.
A chance for Sporting saw Forsyth's free kick attempt sail high over the bar

Church got off to the worse start after only 2 minutes when a free kick saw Gregson dummy and the ball falling to Mikey Taylor, who was given time to control, turn and shoot low past Phillips to make it 1-0 to Sporting.
Like Saturday, Church failed to learn their lesson, as after 51', Hamilton was robbed by Kieron Dawes who unleashed a worldy into the top corner to make it 2-0.
It was now all Sporting, with Gregson on the left, turning inside to shoot just wide of the post.
Hamilton was the Church danger man and causing all kinds of problems for Bromsgrove every time he picked up the ball.
Picking up on the left, cutting inside before Byrne blocked what looked like a goal bound effort.
Church were pressing on a rain soaked pitch and got back into the game in the 83', when Hamilton picked up the ball centrally, went left, cut back before firing a shot in off the post past Taylor to make it 2-1.
Church thought they had equalised a couple of minutes later, when again Hamilton picked up on left, cut inside, before passing to Concannon, who's shot was heading for the top corner before Taylor somehow got a hand to it to push over for a corner.
With Church pushing for an equaliser, Hamilton was not once, but twice fouled before the ball was hoofed forward to find Barnes-Homer, who passed right to Edmunds, who cut in past Taylor to fire low into the corner past Phillips to make the final score 3-1